The above LOVE painting is an example of text-based art by artist Tammie LaMountain.

American artist Tammie LaMountain creates mixed media artworks, paintings, photographs and drawings employing poetic and often metaphorical language. In her own artist statement, she tells us how she creates intense personal moments by means of rules and omissions, acceptance and refusal, luring the viewer around in circles. Her mixed media artworks appear as dreamlike images where fiction and reality meet, well-known tropes merge, meanings shift, past and present fuse. 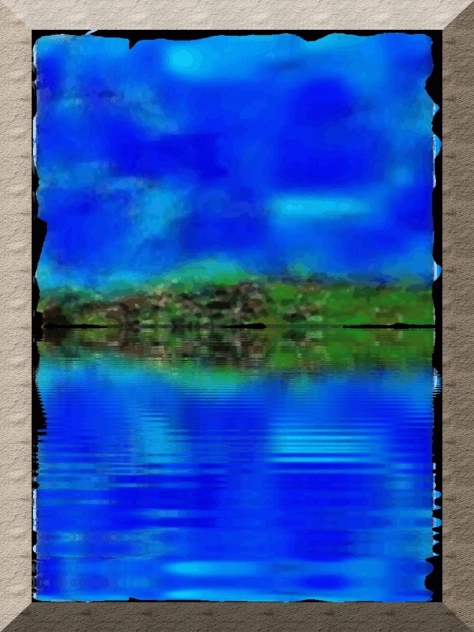 Time and memory always play a key role in her work. By applying abstraction, Tammie LaMountain finds that movement reveals an inherent awkwardness, a humor that echoes human vulnerabilities. The artist also considers movement as a metaphor for the ever-seeking human who experiences a continuous loss. Her works isolate the movements of humans and objects. By doing so, new sequences are created which reveal an inseparable relationship between motion and sound.

By experimenting with aleatoric processes, the artist formalizes the coincidental and emphasizes the conscious process of composition that is behind the seemingly random works.

The thought processes, which are supposedly private, highly subjective and unfiltered in their references to dream worlds, are frequently revealed as assemblages.

Behind Me, Tammie La Mountain

Her works are based on formal associations which open a unique poetic vein. Multilayered images arise in which the fragility and instability of seemingly certain reality is questioned.

By choosing mainly formal solutions, Tammie LaMountain wants to amplify the astonishment of the spectator by creating compositions or settings that generate tranquil poetic images that leave traces and balances on the edge of recognition and alienation.

Her works feature coincidental, accidental and unexpected connections, combining unrelated aspects that lead to surprising analogies. By questioning the concept of movement, she tries to develop forms that do not follow logical criteria, but are based only on subjective associations and formal parallels, which incite the viewer to make new personal associations. Her works doesn’t reference recognizable form. The results are deconstructed to the extent that meaning is shifted and possible interpretation becomes multifaceted.

Tammie LaMountain currently lives and works in the US city of Los Angeles, California.