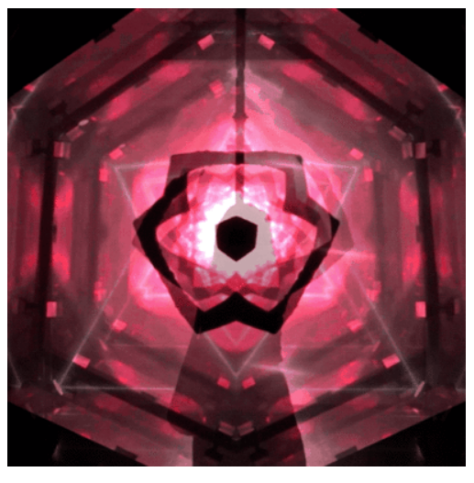 Artist Devin Fleenor will début S.E.E.D., an artificially intelligent installation, in Mexico City in Fall 2017. The piece will be on view at Museo Franz Mayer at part of MUTEK.MX and Abierto Mexicano de Diseño in Mexico City from October 11 to 23, 2017.

S.E.E.D. offers its participants an algorithmic exploration of time and the physical senses. Through self-reflection, layers of consciousness are revealed and unlocked through mysterious mechanisms. Full-spectrum lasers and mirrors create three-dimensional geometric light structures reverberated by analog video feedback. The many reflections of the participants and synthesized, processed, and glitches, forming a perplexing, yet minimal psychedelic visual experience.

Housed in an eight-foot magnesium, acrylic, and glass cube, the piece is activated and modulated by human interaction. Participants do not control S.E.E.D.; rather they converse with an autonomous “machine entity” using motion sensors, infrared cameras equipped with facial recognition, and a hexagonal haptic pressure sensitive interface on the face of the cube.

The visual experience is integrated with an algorithmic, immersive quadrophonic sound field.  Both sonic effects and emotive musical landscapes are generated by the lasers themselves, which are in turn reacting to the environment.  S.E.E.D. has moods of its own, with matching behaviors, stories, reactions, and soundscapes. S.E.E.D. also understands the mood of the participant.   Positive emotion is monitored and remembered, allowing the installation to adapt its algorithms to give the user more of what they like.

S.E.E.D. is conceived of as an art form with research and therapeutic value: drawing from neuroscience research demonstrating that music, light, art, movement, and creativity can generate new neural pathways and enhance neuroplasticity.

About Devin Fleenor
Devin Fleenor is an interactive audio-visual artist based in Phoenix, AZ. He has toured the world with Mr. Meeble, and collaborated with Decibel Festival, Missy Elliott, Nosaj Thing, The Acid, ODESZA, Tycho, Mija, the Black Madonna and various other visionaries, artists and explorers. In 2017, he will partner with MUTEK, Nuit Blanche Toronto, and Abierto Mexicano de Diseño to feature S.E.E.D. Recognized for synthesizing mediums of sound, light, lasers, algorithms and robotics, Devin is creating artificially intelligent art to be discovered in unique spaces across the planet.  For more information, visit devinfleenor.com or follow him on Instagram @epicdevin

This is an amazing collection of vintage film clips of Frida Kahlo in her studio-home Casa Azul or Blue House. I visited Casa Azul in Mexico City, which is open to visitors as the Museo Frida Kahlo museum, and contains many of Frida Kahlo’s things, including her bed, easel, wheelchair, paintings, jewelry, clothing and many other items from her collections.

Keith McFarlane, creator and developer of the ArtWorld app, and Marie Kazalia, Artist Agent and owner of Artist Marketing Resources are making joint efforts to connect artists with curators and collectors using both the app and e-postcard marketing plans to bring more visibility for artists internationally.

McFarlane recently met three artists who are represented on the ArtWorld app at the Window Gallery in Amsterdam, an exhibition space made available by the well-known arts patron and Amsterdam gallerist Ella Arps.  McFarlane met Mexican artist Xavier Yarto there and took home a painting on paper by Yarto, which now hangs framed in McFarlane’s space, as shown in the photos below.

Artist Marketing Resources and the ArtWorld continue to make efforts to connect with more artists in Mexico, such as Mexico City sculptor Luz Zaga Vaca whose two sculptural works are depicted on e-postcards here.

All artists, art lovers and collectors are invited to download the Artworld app in the iTunes App Store.

Left: Roman Kirn, Slovenian Ambassador to The Netherlands. — with Roman Kirn at Overdekunst.

In 1996 Bastide had her first exhibition, which composed of sculptures constructed from chairs. As she recollects “One of my earliest memories as an artist is when I was looking at an old wooden chair I suddenly saw it transformed into a character. That was some sort of a vision which has never left me”.

The works on show will be a mix of paintings from different periods and two “chair sculptures”. In her earlier works Bastide experimented with constructivist ideas, blending geometric forms and blocks of colours in search a true of harmony. In more recent works however, Bastide steps aside from the rigorous geometry and leans towards more spontaneous expression. Bastide explains this change of direction “For some years I have let myself go to a recurring geometrical tendency and I ended up feeling somehow trapped in the shapes.”

In Bastide’s paintings colour is the most important element. It is the starting point and the only planned or preconceived part of a painting “I paint essentially according to my own feelings of a particular colour; I mean that a blue or red or green colour comes over me and I must dive into it until I get saturated with it.” The rest builds up naturally when Bastide lets loose the subconscious creative impulse. Bastide associates herself with the French movement Abstraction Lyrique, not only because she often applies the lessons of Kandinsky in her paintings, but also because of the emotional forces and poetical touch which drive her creativity.

2007 – Gold Prize for the André Parinaud Prize at Espace Châtelet-Victoria
2005 – City Prize from Avon-Fontainebleau for the sculpture-chairs, Contemporary Art Fair, Boisle – Roi
2004 – Silver Medal for the “Arts-Sciences-Lettres” prize.
1998 – Winner of a competition for chair designers and creators organised by Aktuel

Hay Hill Gallery, located on Cork Street, specializes in the sculpture of the famed artist Auguste Rodin and represents a number of internationally recognized contemporary artists. An exhibition of works by Claudie Bastide will be held alongside the sculptures of Auguste Rodin.