Patricia says, “The project is five blocks long, so impossible to photograph (in its entirety).  It continues under the highway, and through a “canyon” that is the spillway for the dam.  In the opposite direction, the stem is a trail, but also the path of flash floods, and at the end of that is the “Lily” root-bulb overlooking a creek (Parley’s Creek).”

Artist Nina Hellman was born in New York City and grew up there. She attended the well-known High School of Performing Arts, School of Visual Arts, and the Art Students League. Nina traveled throughout Europe and North Africa, living as an expatriate in Denmark for four years, and exhibiting in art galleries in Copenhagen.

Since the 1980’s, Nina has had solo exhibition in well-known New York art galleries, and exhibited in several group shows with Ceres Gallery, a New York non-profit alternative cultural center dedicated to promoting women in the arts.

Nina Hellman is an artist and has also been an Art Therapist for over thirty years. All these rich and varied experiences “cross-fertilize” according to the artist, interacting in the mixed media paintings the artist creates incorporating collage elements.

Her paintings of sleeping cats and humans adrift in rich environments alluding to both the physical and the world of dreams. 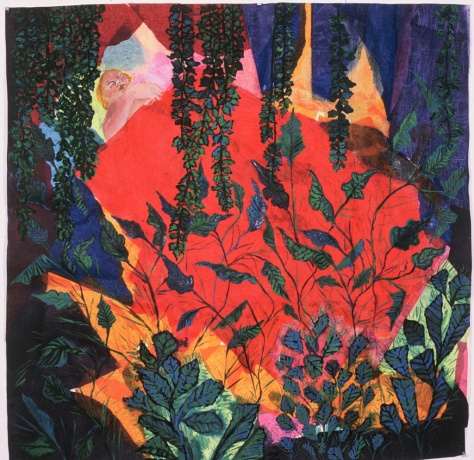 In dianne k webb’s painting, If I can’t dance, female heads with yellow hair and calligraphic arms dance across a city skyline. “I believe that art is a dance, a communication between artist and viewer…” says the artist. “As I work, I want to find myself exploring new perspectives—I want to feel uneasy, jarred, contemplative, or reflective as images, colors, textures clash or meld. I am fascinated by the moment of “ah ha!” of “really?” My work seeks to capture those moments and translate them conceptually, abstractly on the canvas, into words or through theater.

The titles dianne k webb’s has chosen for her paintings are, not surprisingly, filled with the language of dance and theater. In addition to being a painter, dianne is also the director of the Next Iteration Theater in Houston, Texas. Interestingly, the logo image dianne chose for her Next Iteration Theater website, is her own photograph of headless sculptural forms inside an ancient church in Paris.

Next Iteration Theater is in its infancy, according to dianne. “I am just bringing together a few people who want to be part of this project and we are just setting up the “legal” pieces….figuring out our structure, which will be ensemble in how we operate with actors, and in general. I am teaching acting classes here in Houston and building up some interest that way. I believe that actors need affordable classes so they can work on skills when they are not performing and hone their craft, after all as an artist I spend hours every day in the studio.”
Dianne also directs for several small theaters in Houston and loves working with new playwrights. She is interested in “casting across races and ethnicities and changing how we “see” traditional pieces…something I do not find in many theaters here, in spite of the vast diversity in Houston.”

The tiny human figures in dianne k webb’s painting titled El Malecon appear to be traversing the globe, while the forms in her painting titled But You Thrive seem to be pure abstract movement.

But You Thrive, dianne k webb

Also recurring in webb’s paintings, the viewer will find handwritten text as visual element. Refer back to the Next Iteration Theater logo image and note that the headless sculptural forms are holding books in their arms. And so we see the recurring visual elements of the artist’s themes of text, the writing of the playwright, human figures, movement, and abstract forms in motion as they seem to move into place to suggest form, connect, and disperse to dance again on a stage. Or, as the artist herself wrote, her paintings are– “a statement laid bare until picked up and incorporated into a new narrative.”